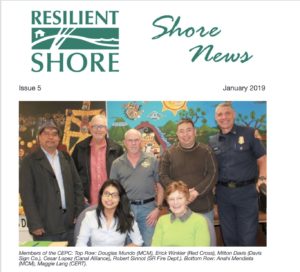 Surrounded by beautiful golden hills and sparkling water, San Rafael appears to be safely nestled in a protected crook of the northern San Francisco Bay. But there is a largely invisible danger that our city needs to address. Global sea level rise threatens a large area of San Rafael as much of our waterfront is unprotected and difficult to access in case of emergency. The good news is that community organizations, residents, and business owners are already working together to create plans for emergency preparedness.

What are the Risks?

Working Together Against Flooding, Earthquakes and Sea Level Rise

The expectation of all participants is to share skills, knowledge, and expertise to identify what’s best for local families and communities in the event of a disaster. Their vision is threefold:

The CEPC aims to foster an authentic community engagement process that results in concrete solutions. The group meets 10 times a year, and the next meeting will occur in February. Meetings are open to anyone who is interested in participating, so please check Multicultural Center of Marin’s website for exact date. Although the CEPC is still in its inception, they have already achieved several of their immediate goals. 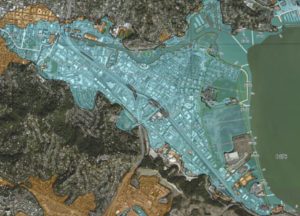 2016 FEMA Flood Insurance Rate Map showing the Central and East San Rafael Valley. Downtown San Rafael is in the upper left corner and the Junction of US 101 and I-580 is in the center. The bay is on the right side. The light blue area would become flooded in a “100 year” storm (1% probability in any year) with the water depth dependent on elevation. A flood would happen during the simultaneous occurrence of a king tide and major storm with rain for several days. This kind of atmospheric river storm caused the great Redwood Empire 1964 flood. At its peak, the Eel River discharged as much water into the Pacific as the average flow of the Mississippi River. Without adaptation and flood risk reduction measures, the blue area will eventually be inundated by the bay.

Emergency Preparedness Planning for the Future

What You Can Do to Help

The Emergency Preparedness Council is seeking volunteers. You can get more information or sign up here. But also, emergency preparation begins at the individual level. Protect yourself in the event of a disaster. We recommend:

We welcome your input! Please email us questions, ideas, or suggestions at info@resilientshore.org