Among the many advocacy actions that Resilient Shore engages in, we are creating a digital library of key resources addressing sea level rise.  This page contains summaries and links to science talks, policy and government documents for San Rafael, Marin County, the State of California, and relevant national and international case studies. We welcome you to share additional useful and timely resources with us! 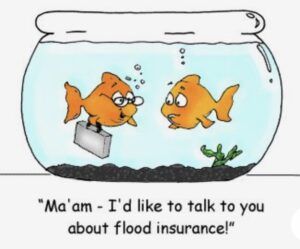 In San Rafael, over the past twenty years, National Flood Insurance Program (NFIP) premiums exceeded the return in claims by over $25 million. Concurrently, San Rafael has a protection gap — less than half of the residents have flood insurance. NFIP programs and policies disproportionately disadvantage homeowners of color. Yet insurance can support community resiliency through post-disaster recovery funding. It can also be a source of funding for investments in nature-based risk mitigation.

Resilient Shore, along with the Canal Alliance, Richardson Bay Audubon Center and Sanctuary, ENGEO, and Epic Brokers submitted a grant application for the California Resilience Challenge, an initiative of the Bay Area Council.
Our proposal involves establishing a private flood insurance pilot program in southeast San Rafael as an alternative to National Flood Insurance and consider how to implement nature-based solutions for flooding and sea level rise adaptation. We are working with Munich RE to provide a menu of different community-based insurance options for better coverage at lower premiums.
Our MeetUps for the months of August – October 2021 have focused on the potential for developing a community-based insurance pilot program. You can read more about this in the Marin Independent Journal article linked here: San Rafael flood risk prompts Canal insurance project. 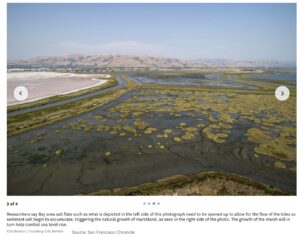 The simple local solution to sea level rise? Mud from the bottom of San Francisco Bay

“Protecting the Bay Area from sea level rise may all come down to mud.That’s the finding of a new report from San Francisco Estuary Institute that tries to address a two-part problem related to the looming threat of sea level rise: the lack of natural sediment coming into the bay and the need to reinforce its shorelines to protect the region from rising seas.

There’s a fairly straightforward solution, the nonprofit research organization proposes: Take the sediment that’s dredged from the bay’s shipping channels and barged out to sea or to deep parts of the bay — 2½ to 3 million cubic yards of mud a year — and use it to restore wetlands on the perimeter. The estimated cost is $25 million to $35 million a year, which the authors say is far less expensive than building seawalls or making emergency fixes to flooded highways and airports.” 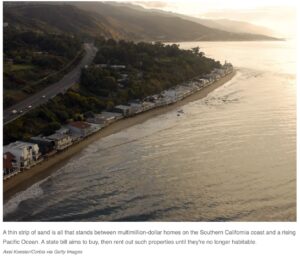 California Has A New Idea For Homes At Risk From Rising Seas: Buy, Rent, Retreat

“Within the span of a 30-year mortgage, more than $100 billion worth of American homes is expected to be at risk of chronic flooding. As the climate warms and oceans rise, narrow strips of sand such as the one Allen is standing on, will be submerged, leaving coastal communities — affluent and not — with the torturous question of how to adjust. Build sea walls? Dump sand? For how long and at what cost?”

That’s why the 43-year-old Democrat has proposed legislation to create a revolving loan program, allowing California counties and communities to purchase vulnerable coastal properties. The goal would then be to rent those properties out, either to the original homeowner or someone else, and use that money to pay off the loan until the property is no longer safe to live in.

Think of it like a city-run Airbnb, where the profits go to making sure nobody is left picking up the full tab when the Pacific comes to collect.”

Read more on this link (or listen to the audio file).

Resilient Shore has added both the original video file and the webinar chat transcript to our Library: click on either link to view this highly educational webinar at your leisure.

New Sea Level Rise Reports to Dig Your Teeth Into 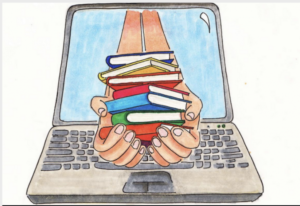 The three reports are internet accessible and available in PDF form. The citations and links are noted below:

“The Grand Jury makes several interrelated, but not interdependent, recommendations to help Marin move forward in its climate change efforts, including the following:

■ The county, in collaboration with the municipalities and other Marin agencies affected by climate change, should convene a multi-jurisdictional task force charged with developing a countywide adaptation strategy appropriate for adoption by each participant.

■ The county government should consolidate all of its mitigation and adaptation programs in a new office that would coordinate and unify climate change efforts at the county level. The Marin Climate & Energy Partnership should expand its mission beyond greenhouse gas reduction to include adaptation planning support for the cities, towns, and other members.

■ The county should study the feasibility of reorganizing the Marin Flood Control and Water Conservation District into a new agency governed by the county and all 11 cities and towns, with an expanded mission that includes climate change adaptation projects.”

“The City’s Department of Public Works initiated this study, and has collaborated with the City’s Department of Community Development and Marin County. The study’s goal is to develop a sea-level rise adaptation plan that can be implemented for the benefit of the City and its residents. To meet this goal, this study’s objectives are:  Assess existing flood risk and flood risk that includes future sea-level rise projections  Develop reasonable and feasible sea-level rise adaptations appropriate to the City’s shoreline  Evaluate adaptation measures to characterize the measures’ costs and benefits  Integrate recommended measures into phased adaptation plan to guide implementation To achieve these objectives, this study conducted flood hazard mapping and vulnerability assessments for the City shoreline. Based on this assessment, the study recommends adaptation measures for each shoreline region. Adaptation measures that address sea-level rise for the City shoreline will need to be integrated with a larger, regional strategy of flood management and adaptation.

This adaptation report is intended to ‘set-the-stage’ for coordinating and preparing a detailed adaptation plan for the San Rafael planning area. “ 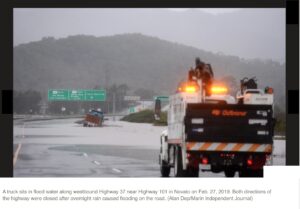 Marin County and the North Bay could see the worst traffic delays in the Bay Area as highways become more prone to flooding, according to a new Stanford University study. Published this week in the Science Advances peer-reviewed journal, the study assessed how a combination of sea-level rise, tides and storm surges in the next 20 years would affect the Bay Area’s existing traffic jams if left unaddressed. While the North Bay doesn’t have the most flooding compared to other areas, the flooding occurs at critical connection points where few if any alternative routes exist, said study coauthor Jenny Suckale, an assistant geophysics professor at Stanford. That’s bad news for Marin. Read more

What’s being done to protect Marin’s coastal lands from the effects of climate change? 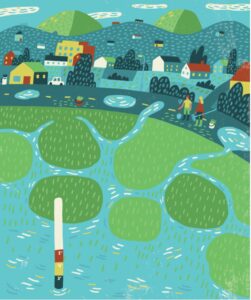 In the near term, a timeline from now until 2030, sea level is projected to rise between 10 and 12 inches over current tidal heights. By midcentury, areas of Marin will likely see a 20-inch increase. “It is not surprising that Marin is very vulnerable,” says Chris Choo, the county’s principal planner for the public works department and project manager for BayWAVE. “And it is not vulnerable just in a couple of places. The way this county is configured, sea level rise is going to be a permanent problem.” Working to involve Marin’s residents, county officials developed two community outreach programs — Bay Waterfront Adaptation and Vulnerability Evaluation (BayWAVE) and Collaboration: Sea Level Marin Adaptation Response Team (C-SMART). While BayWAVE focuses on adaptations for the bay side of the county, C-SMART concentrates on strategies for our peninsula’s open coast. To understand how rising seas will likely affect Marin, the planners aligned the county’s infrastructure data with the statewide sea level study “Our Coast, Our Future” (OCOF). The OCOF program is an ongoing collaboration between Petaluma-based Point Blue Conservation Science group, the U.S. Geological Survey and a number of other agencies. It uses various probability models to determine how sea level change will alter California’s coastal region. 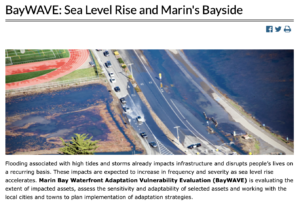 These impacts are expected to increase in frequency and severity as sea level rise accelerates. Marin Bay Waterfront Adaptation Vulnerability Evaluation (BayWAVE) is evaluating the extent of impacted assets, assess the sensitivity and adaptability of selected assets and working with the local cities and towns to plan implementation of adaptation strategies. There are two main sea level rise assessment projects that are underway in the County – one along the coast (C-SMART) and one along the bayside (BayWAVE). But there are other community engagement and educational outreach programs that you can learn about here.  You can join the effort by subscribing here, staying informed, and contributing your ideas and thoughts.

BayWAVE is a focused vulnerability assessment that will evaluate the extent of impacted assets and work with local cities and towns to plan implementation of adaptation strategies.

“[This Atlas presents] a science-based framework for developing climate adaptation strategies that are appropriate to our diverse shoreline settings and that take advantage of natural processes in the Bay.” 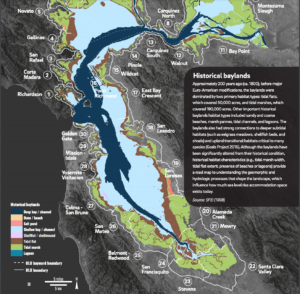 As various adaptation strategies are described and proposed, the Atlas maps out which areas would be suitable for different measures, including (but not limited to) expanded eelgrass beds, mudflats, beaches, and tidal marshes; establishing polders, ecotone and super levees, flood walls, sea walls, bulkheads, and greenwater infrastructure; reconnecting creeks to baylands; different types of grey infrastructure, and policy, regulatory, and financial measures. Each OLU is evaluated for a mix of selected adaptation measures  – recommendations for Corte Madera, OLU-2 are contained on Pages 120-121; for San Rafael, OLU-3, on Pages 122-123; for Gallinas, OLU-4, on Pages 124-125 (and so on).

Shinnecock Indians are using nature-based solutions to calm the waves and restore the beaches that protect their lands. 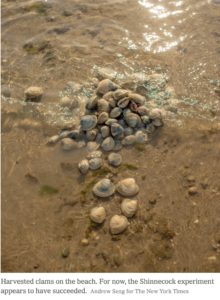 By Somini Sengupta and Shola Lawal

March 5, 2020 SHINNECOCK NATION, Southampton, N.Y. — A maritime people who once spanned a large swath of the eastern Long Island shore, the Shinnecock Indians have been hemmed into a 1.5-square-mile patch of land on the edge of a brackish bay. Now, because of climate change, they’re battling to hold on to what they have left.

Rising seas are threatening to eat away at the Shinnecock lands. But the tribe is using everything at its disposal to calm the waves and restore a long, slim beach at the edge of Shinnecock Bay: dredged sand, sea grasses, beach grasses, boulders, oyster shells.

It’s a forever battle. Climate change is swelling and heating the world’s oceans at an accelerating pace.

What the Shinnecock are doing on their land represents what climate adaptation experts call nature-based solutions. Several such efforts are underway elsewhere. New York City’s oyster reefs are being restored to protect Manhattan from storm surges. Marsh grasses have been planted to control erosion in parts of the Florida panhandle. Mangroves have been restored in Vietnam to protect coastal communities from sea level rise and storm surges.

https://youtu.be/D_3Cg8cfw4I The Northern Gulf of Mexico Sentinel Site Cooperative (NGOM SSC) is one of the five Sentinel Site Cooperatives within the broader NOAA Sentinel Site Program (SSP). The NGOM SSC is a partnership focused on sea-level rise and inundation in the northern Gulf of Mexico, a geographic area defined as the coastal counties from the Pearl River to the Suwannee River. A broad array of partners working along the science-to-stewardship continuum make up the Cooperative; the NGOM SSC  Cooperative partner base includes academics, non-governmental organizations, and other federal, state, and local government departments.