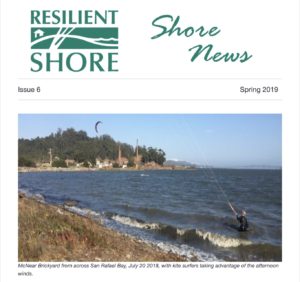 McNear Brick and Block company sits on a piece of land jutting out into the San Francisco Bay in East San Rafael. Situated on an ancient Native American shell mound, the factory was built on what came to be known as McNear Point (or Point San Pedro) in the heyday of Marin County’s post-gold rush manufacturing and shipping boom. McNear Point was a self-contained village that was easier to access by water than land. It took about an hour by wagon from what is now downtown San Rafael, and that’s if the road wasn’t a muddy quagmire. Today it is known as Bayside Acres and consists of a modern housing development and the brick kiln smokestacks rise up as a reminder of the areas industrial history. The adjacent shoreline is home to recreation and nature enthusiasts.

McNear Brick & Block is a rare example of a functioning, 19th-century industry that was founded along the bay due to easy transport of raw materials and finished goods via the bay and inland waterway system. Another rare remaining functioning example of a once-common, maritime-oriented, industrial typology is the C&H sugar refinery in Crocket on the Carquinez Strait. It still receives raw sugar from Hawaii to this day, perhaps in part due to sugar tariffs. Today, the only products shipped on lighters and barges from within the bay are occasional large fabricated structures for major construction projects, such as bridges and ports, and stone rip rap for delta levees and maritime construction from places like Dutra’s San Rafael rock quarry.

The original brick factory was built by Victor Fortin in 1885 at Point San Pedro. The oldest kilns still standing are the Hoffman Kilns built in 1902 and 1904. The third smokestack still stands but the attached kiln is long gone. The narrow spires rise over the water and make a distinctive image at the edge of the shore. Bricks made by Victor Fortin are still visible today in the Peter Building in downtown San Rafael, located at the northeast corner of 4th and C Streets. Fortin Brick Company became the largest brickmaker in the Bay Area at that time.

In 1868, the land was sold to John A. McNear when Fortin went bankrupt. McNear and his family took over the brick plant. McNear intended to open a shipping terminal. A natural deep-water terminus, this site would have been ideal for shipping freight via train and schooner. He started to build a railroad, but when his financial backing was lost in the San Francisco Fire of 1906, the plans were cancelled.

The bricks made from local clay deposits were shipped solely by scow schooner along the Bay waters to their various destinations, including barges headed for San Francisco, Sacramento and, beyond. In the 1920s and 30s, local road conditions improved due to paving, and reliable trucks and motorized equipment proved more efficient than schooners as a means of transport, so the schooner’s popularity fell away. To this day, the only bricks shipped by water are first trucked to the port of Oakland and then sent in containers to Hawaii, Asia, and Africa. 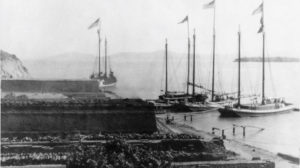 Additionally, sediment may have been a factor. Hydraulic gold mining in the Sierras produced significant deposits of sediment in the Bay that raised the Bay floor and made water transport more difficult.

Bricks made by McNear Brick and Block never had any identifying stamp of manufacture by design, but records show that many local buildings are constructed with these bricks: Shriners Hospital on 19th Avenue in San Francisco, San Rafael’s city hall and library, UC Berkeley’s Phi Gamma Delta fraternity house, and the Church of the Redeemer in San Rafael.

Bricks made in Hoffman kilns had a variegated color but in the 1950s, consumers started to prefer bricks that were all the same color. So, the McNear Company built three new oil-fueled field kilns starting in 1956. Initially capable of holding 500,00 bricks, the kilns were expanded in 1963 to hold 750,000. However, the escalating price of fuel in the mid-1970s made the expense of these kilns unsustainable, so the company built a Ferro kiln, which uses one-third the amount of fuel as a field kiln. By 1993 the field kilns were removed, and the historic Hoffman kilns were preserved and are now used as storage facilities. 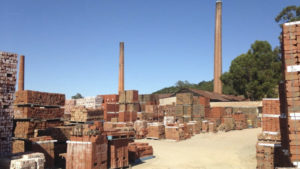 McNear brickyard showing the variety of bricks produced in their tunnel kiln with the Hoffman kiln stacks in the background: July 29 2015. The Hoffman kilns have been idle for over 50 years.

Today, McNear Brick & Block Co. produces a wide variety of brick products in dozens of styles and colors. The most common types of brick include the familiar large red clay brick, thin brick veneers (often used to face interior walls), interlocking pavers, blocks for landscaping, retaining and freestanding walls, and fireplace masonry. The bricks are painstakingly crafted and are time-consuming to get right. Setting, firing, cooling and wheeling takes a total of four weeks from start to finish. Interestingly, hot bricks are brown but turn red as they cool. The beauty of the natural and recycled materials is evident in their sustainable products. 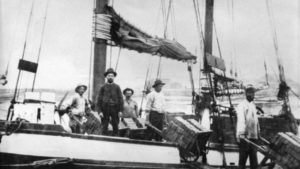 Bricks being loaded onto one of John “Toe-Jam” Olsen’s fleet of schooners, c.1900.

Letter from The Executive Director

The San Rafael and North Bay landscape is a record of both natural systems and human activity.  The physical decisions we make as individuals and as a society leave cultural imprints on the landscapes we know and love. This month’s feature article tells the story of a prominent cultural artifact on our shore: the McNear brickyard.  While it has significantly altered the natural landscape, it’s a compelling and historic place that continues to have relevance today.

The brickyard has been in operation for over a century, a remarkable feat considering societal and economic changes since the 1880s. A visit to McNear feels like walking back into the 19th century. Approaching from the west on Point San Pedro Road from downtown, a cluster of weathered wooden buildings, pallets of brick and three smoke stacks are in prominent view across San Rafael Bay. However, its enlightened owners, dedicated employees, and modern equipment produce and successfully market a variety of high-quality concrete block and fired clay brick products that are valued by contemporary consumers.

The brickyard is a rare functional piece of history of the Bay Area’s rapidly disappearing industrial past, along with the C&H Sugar refinery in Crockett and the dry docks at Mare Island. This longevity is a delight for those of us who have an affinity for our shore.

We bring you this history in order to share a variety of interesting features to inform and build a constituency of citizens, neighborhoods, and organizations in support of San Rafael’s shore. We encourage our readers to learn more about our natural and cultural shore landscapes and participate in efforts to enjoy, protect, and enhance them.

In our previous issue I reported on the San Rafael’s 2040 General Plan Steering Committee’s consensus on the need to address climate change adaptation as part of the General Plan Update. I met last month with Paul Jensen, San Rafael’s Director of Community Development and Cory Bytof, the city’s Sustainability Coordinator to brainstorm ideas for a Sea Level Rise/Flood Risk Management Report as a possible appendix for General Plan 2040.

The budget for the General Plan doesn’t include this task. However, city staff is looking for ways to move forward and identify policies and programs to be included in the 2040 Update. This effort would build on Paul Jensen’s 2015 Sea Level Rise White Paper, Chris Choo’s Marin County Bay Wave Vulnerability Assessment and the 2018 Resilient by Design Elevate San Rafael concept.  We will keep you informed.

Help us share more stories and support our mission of reducing flood risk and adapting to rising tides by donating to Resilient Shore through MarinLINK and sharing your shore stories and photographs. Contact Sian Killingsworth at info@resilientshore.org

Together we can do this!

Positioned at the edge of the San Rafael canal, the shops and restaurants of Montecito Plaza know well that proximity to the shoreline means not just pretty views but also the risk of flooding. To aid in our goal of protecting San Rafael’s shoreline, residents and businesses, Montecito Plaza has generously donated to Resilient Shore.