We recently interviewed Catherine (CJ) Healy, who is a San Rafael High School physical education instructor. She offers sailing classes to her students and has a unique perspective on our waterfront. Classes are conducted out of the San Rafael Yacht Club, and students learn to handle Laser sailboats on the Canal waters. Lasers are ideal for beginning sailors because they are small, light, and easy to maneuver. The Laser’s hull is less than 14 feet long, and weighs only 130 lbs.

How long have you been sailing around San Rafael?

I’ve been teaching sailing at SRHS since 2003. So, 16 years. I haven’t done much actual sailing myself – between having kids and coaching basketball, sailing hasn’t been much of a hobby. Since 101 Surf Sports opened up, I have done some stand-up paddle boarding, which is a fun change of pace!

What are the most important things to know about using the canal for recreational sailing?

It is shallow, so big boats need to be aware of tides, but it is also quite narrow. Not ideal for sailing – only small boats, like the ones we use for class (Laser), and even smaller, could really actually sail on the canal. Other, bigger boats will motor out to the bay to sail there. The canal is a channel, so boats mainly use it to get from their home at a marina, dock, etc, or a business, such as Terrapin Crossroads, out to the bay and back.

Another issue with the SR Canal is that it the winds are quite shifty. Due to the bending nature of the land around the canal and the apartment buildings, the wind can shift, gust, change depending on your location. Makes it hard to sail upwind. 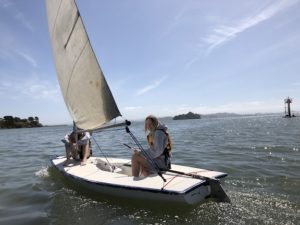 Is the water clean? I’ve heard conflicting reports – some say it’s dirty from dumped waste from boats, some say it’s much cleaner than it was in the 1980s.

The water is clean – tidal, as you know, so changing a couple times a day. The mud underneath, that’s a different story. There are mummified shopping carts and who know what in the canal mud! As long as you don’t drink it, it’s not harmful.

Unfortunately a lot of trash finds its way to the canal, and typically floats up to the turning basin and gets stuck there. Plastics are the worst as they float and don’t disintegrate. My students can earn extra credit, once a semester, for helping remove trash from the Canal.

Have you noticed changes in the water/shore relating to climate change?

I haven’t noticed a change in the shoreline, except for maybe more plastic floating trash. But the depth of the canal is much shallower. I would guess at the deepest, it’s probably 3-4 feet shallower than when I started teaching on the canal.  That is not necessarily a result of climate change – silt builds naturally with the coming and going of tides, and a man-made channel like the SR Canal would need that silt to be manually removed periodically or else will eventually fill back up to its original state. I don’t believe a dredging has happened for about 10-15 years.

What are your concerns/thoughts about maintaining the canal and shoreline around San Rafael for recreation?

I think that the SR Canal is a gem, and an underutilized resource for the city of San Rafael. Businesses like Terrapin Crossroads and 101 Surf Spirts have brought some life back to the waterfront, but it would be great to encourage more recreation and business driving people there. The back side of Montecito has potential, and it would be great to see some public docks go in for visiting boats to come and stop for the day!

The San Rafael Yacht Club has been very good to me and San Rafael High Sailing students over the years. I know they host visitors and it would be great to have the City partner with them to rebuild their stilted waterfront patio. The SRYC is a great place to host events and parties!