The San Rafael Operational Landscape Unit (OLU) “has the highest proportion of people flooded at early water levels of the 30 OLUs throughout the region.” – ART Adapting to Rising Tides: Local Assessments Section B Page 29,  April 2020

The San Rafael Operational Landscape Unit (OLU) encompassing San Rafael Creek and adjacent smaller watersheds between Point San Pedro and Point San Quentin has been identified as a Regional “Hot Spot” due to its concentration of critical regional infrastructure assets.

The San Rafael OLU has major transportation infrastructure such as US 101, I 580, SMART, the San Rafael transit center and the North South Greenway.  It also includes the Canal Neighborhood, Marin’s largest and densest disadvantaged community and approximately 60% of the city’s sales tax base. 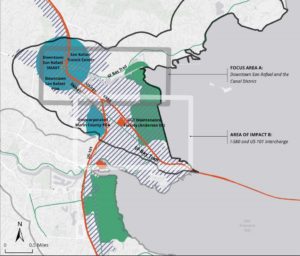 Critical facilities that provide emergency services and utilities may be impacted by flooding . First impacts begin at 36” TWL and increase through 108” TWL.”

During the webinar Ms. Brechwald highlighted key findings from the 205-page report (available for download here), most demonstrably the fact that the greater San Rafael area is consistently the first to be impacted by even the lowest sea level rise predictions.

For answers to all these questions, and more, see the following links:

The local assessment for the San Rafael OLU can be downloaded here.

The video recording for Dana’s webinar can be viewed on this link.

The audio recording for Dana’s webinar can be accessed via this link.

A transcript of the recording for Dana’s webinar can be downloaded via a separate link.

Citizens interested in providing direct input by participating in a BCDC working group can contact Dana directly: her information is on this link.